When we talk about making changes, most people look for inspiration.  Cue the Rocky theme. New gym joined. Throwing out all carbs. Exercising 7 days per week. Meticulously tracking steps.  Becoming obsessed with portions. Copying your hero's regimen (the Rock doesn't eat any fat, he says, so neither do I). Scared of dietary fat.  Skin is dry, Feel like shit. I hate exercise. Can't sleep but always tired. Oh look there's icecream. Now I weigh more than when I started.

And all that takes for some people is a week.

I heard an excellent observation of data from Dr. Mike Israetel on all the thousands of clients they work with at RP.  He said in observing dietary adherence and success, the least successful and adherent clients are the ones with the most weight to lose.  Often they find those clients need shorter periods of fat loss with more frequent periods of just maintaining and practicing good habits.  The more experienced and leaner clients can stick to a plan longer.

The confounding variable in both his (from what Dr. Mike says) and my experience is that the clients with the most weight to lose quite often have the highest expectations for their results and want to try the most extreme measures.

So we have a case of low ability with high expectations.  Excuse the crude analogy but if you're a 6th grader, no matter how bad you want it, you simply aren't ready for college.  Wanting it isn't enough because the skills and knowledge aren't there for you to be successful.  Sure, maybe you're the Doogie Howser of nutrition but for pretty much everyone else, failure would be imminent.

Now I don't look at this with judgement personally or as a coach.  Lord knows when I was young and overweight with deep, gnarly purple stretch marks, thighs that rubbed together, man boobs, a double chin, fleshy forearms that smooshed on my desk at school (you don't soon forget these things), the fastest I could escape from my current body, the better.

But I wasnt equipped to make the change.

See, magazines, ads, actors and pretty much anyone trying to sell you anything body related is only selling the big picture. They only want you to think big, act big.  When it comes to nutrition, thinking big and acting big for those who haven't been successful long-term is a disaster.

I thought it was "go big or go home"

Whenever you see an actors transformation, you get to see them completely out of shape and then totally in shape.  Lets say we look at someone like Hugh Jackman.  We see him now in movies with a ridiculous physique and our only thought is how he currently looks, what he's currently doing. But if you look back at the very first X-Men movie he had a pretty normal body of someone with a little muscle. 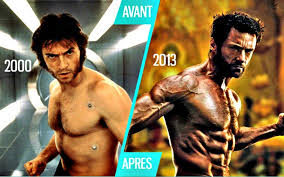 That's right, and the dude is still training to this day.

But he's also got a trainer he works out with every single session, a chef who cooks his meals and millions of dollars on the line for him to look a certain way.  And remember......this is 13 years.

So with all his advantages he still had to work really hard, stay committed and do it long-term.  And for a guy like this even the money isn't enough of a motivator, he still needs the support of a trainer and chef to reach his goals.

Geez, what does this mean for the rest of us?

Think of your goal.  What is ONE goal you want to achieve and can actionably measure?  For lots of us, it is be leaner.  Lets say your goal is a 6-pack.  Great you are now THINKING BIG.  But acting big is the list of dead-ends from my opening paragraph.  Jumping into too much too soon almost always results in falling short and so many people end up worse than when they started.

I know, I know.  You've still got to go to the gym, work, shop, prep, cook, eat your meals, avoid temptation, sleep well and the list goes on.  But what are you doing RIGHT NOW that you can be successful with.

At The Strong Kitchen, we make a lot of meals every week.  There is so much to prep, cook, cool and pack.  But at any one time I might just be peeling a single potato.  I can't peel them all at once and I can't magically jump forward in time to when they're done (yet, science!) so all I can do is focus on One. Single. Potato.  What's my job then in that moment?

Execute peeling a potato the most efficiently and quickly as I can.  Then the next, then the next. And somehow, with very small actions compounded we have 600+ meals prepped, cooked, cooled, packed and delivered.

But if I only think about how I am going to turn that single potato in 600 meals, it's overwhelming and paralyzing.

All you can do in each moment is act small.

I read a great post about microgoals from my friend and former co-intern at Cressey Performance, Georges Dagher.  He's Canadian so George gets an "S" slapped on it.  And his last name is pronounced Dagger so all around, he's got a good deal in the name department.

That aside, he recently completed the Seal Fit challenge.  If you don't know what it is, check it out here and then pick your jaw up off the floor.

Georges discussed that at times the only way he could keep going was focusing on microgoals.  What is the next smallest thing you can accomplish to work you towards your goals.

I need to eat better to get my 6-pack.

I need to overhaul my diet.

I need to cook all this food.

I need to prep all this food.

I need to shop for all this food.

I need to just get to the grocery store.

You could start at the top, but why not start at the bottom with a much smaller goal?  Instead of stacking up all the other goals, just GO to the grocery store instead of a fast food place.  That's it.  Georges shared that another trainee simply chopped his challenges into 10 second microgoals.  In some instances it's the only way to get the job done.

As a coach, I've done this with clients when training.  They're scared to do a high rep set of squats.  So I tell them just to do 5.  Then at 5 I say "just one more", then "just one more" and I keep chipping away one rep at a time until they've done 10 or more.  Since they don't know how many they can do (and neither do I), we tackle the reps one at a time.  Just one.  Just one.

At least when it comes to nutrition.  Yes the stakes can be high, yes the goals can be high.  But when it comes down to it you just need to eat your next meal.  Clients who struggle with adherence take every stumble as a failure of the whole.

But you just need to eat your next meal in line with your goals.  Yeah yeah I know you didn't bring a lunch or you wanted a salad and they didn't have one.  Cry me a river. And I'm serious because we ALL encounter those issues so none of us is immune to struggling.

The most successful dieters make the best decision they can based on their circumstances.  You ever go to the movies?  My ideal is a theater with zero other people in there.  But that ain't happening.  So OK I choose a movie time with fewer people.  Then I look for my ideal seat, usually I can't get the perfect seat. So I get the next ideal seat. Yes I had to compromise but it means making the best decision I can without having to give up on seeing a movie I really want to see.

I can't speak for everyone but my guess is a lot of people who struggle with adherence think that when they slip up, they're the only one who is failing.  When my wife was having a shitstorm of immune issues her strength and body comp took a plunge, almost completely out of her immediate control.  And her worry often was that other people were getting stronger, leaner and seeing results and she was the only one who wasn't, despite trying really hard.  It broke my heart because the reality is she was NOT the only person struggling.  Her situation was harder than most and my guess is most people would have given up and accepted their declining health. Many people do.

We did thousands of dollars of bloodwork, cortisol testing, doctors appointments.  We completely changed her nutrition based on those results. Then we had to plan and shop for those changes.  Cook for those changes. Execute those changes even when meals sucked.  Eating out in a restaurant was almost impossible.  Sometimes she'd accidentally consume a food that caused an immunilogical response and feel a setback.

Oh yeah and she's been doing it for over two years.

If you came to us and said "yes, you will actually get stronger, leaner and more healthy but it is going to take a gigantic life change, lots of money spent and you need to commit two years before really seeing results" I don't know if we'd have been able to do it.  The big picture is just too big.

So we focus on the next meal. Shopping for ONE snack that works with her dietary restrictions.  Finding ONE restaurant that she can order ONE thing from.  Toying with her training to find what she could recover from.  Overhauling our sleep schedule, stress management.  So much money and I mean so much money on the right supplements.

Guess what?  It has absolutely paid off. She's benched the 60lb dumbbells for reps when she would crumble under the 40s just a year ago.  Do you know how soul crushing it is to be actively get worse while trying your hardest to get better?

In all that time, all we could do was focus on the next actionable goal.  Despite failing and screwing up a lot.  Failure isn't just normal, it is a vital part of the process.  And no big goal can be tackled as a whole.

If you feel alone in this, you aren't.  You are one of thousands if not millions of people struggling with a goal. But it needs to be broken down into actionable steps, acting small, microgoals, accepting failure, learning from mistakes.  In fact, your only one job is not to give up.  That's it.

I've had the pleasure of driving through the world's longest under-mountain tunnel in Norway.  Old tunneling methods used to get just a few feet per day.  New tunneling methods can get builders around 35 feet per day.  A one and a half mile tunnel generally takes over a year .  The Laerdal Tunnel in Norway is over 15 miles long..  With electronically controlled rock drills from both sides, blasting and excavating it still took over 5 years to build. 5 years for fifteen miles.  And by my calculations that gets the construction crew drilling a max of 43 feet per day.

One of the worlds biggest tunneling projects had to come down to 43 feet per day.  Even a mountain can be conquered.  But with billions of dollars, a huge crew, 5 years of planning and full goverment support, 43 feet is the best any one day could bring them.  I'll let you draw a conclusion.